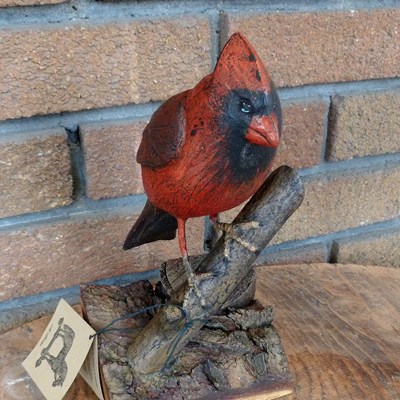 Michel Fortin was born in 1957 in Quebec City. From an early age, he already had certain skills for the arts. He was introduced at a very young age to using tools by assisting his father in the manufacture of toys and furniture.

At school, in shop classes, he developed his ability to work wood, and in art classes he excelled and even won some competitions.

It is while working on the restoration of old Quebec furniture that he becomes familiar with the working methods of our ancestors. By noticing the degradation of the color, texture and finishes of wood caused by time and wear, he developed a technique reproducing the same state as an object that has gone through more than a century of use.

After having long documented history, objects and toys traditionally made by craftsmen and fathers, he began to make his own creations. The different pieces of his works, carved from pine, are joined with wooden pegs, then coated with colors of which only the artist knows the secret. Although his creations are contemporary, he manages to recreate the finish and patina of the antique pieces. They are inspired by wildlife, as well as Quebec's historic and legendary heritage.